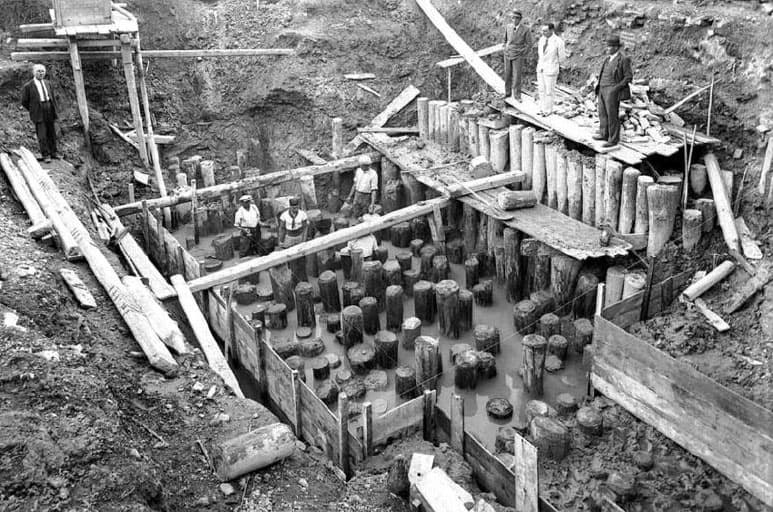 Venice has always had to live with the water that surrounds it, and with the erosion that it causes, especially on the shores. That is why the latter are protected by white Istrian stone.
In many cases entire areas of the lagoon have been filled in order to enlarge the building zones.

Before starting to build the palazzi that line the canals, the Venetians drove wooden piles into the ground to make it more solid.
As you can read in the Atlante storico della Serenessima,”The foundations of all of the buildings are made of very strong oak piles, which last eternally under water… These are driven firmly into the ground in dense groups, then blocked with large crosspieces and the space between them is filled with fragments of stone and cement, which solidify them into firm, stable foundations.” 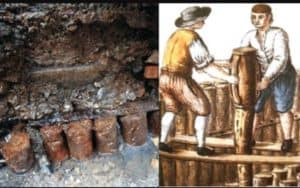 These are then covered with a layer of thick planks and blocks of Istrian stone. From here they began to raise the foundation walls. In other words, it’s as if Venice were built atop an upside-down forest.

The buildings had to adapt to this unstable terrain, this is one of the reasons why the buildings in Venice are extremely flexible, and therefore able to adapt to the movements of the ground. The walls of the buildings overlooking the canals are mainly perimeter walls; the facades, in fact, are not bearing walls at all, which is why they can be so full of decorative openings—such as the characteristic windows—which allow light into the rooms and halls of these historic palazzi.

Strolling down the small side streets, you’re sure to have noticed some walls that swell outwards or tilt inwards. This happens because they are built in such a way that the walls don’t open outwards but rather, to prevent sagging, tend to lean towards the roof. The floors of the buildings are also made of wood, a lightweight and flexible material, and attached to the walls with metal ties, so that these horizontal structures work against the outward collapse of masonry elements.

So, where did all of this wood come from?

The Cansiglio forest was always part of the Repubblica Serenissima (Most Serene Republic of Venice), which needed to preserve productive and efficient forests in order to supply timber to the Venetian Arsenal for the construction of oars for Venice’s famed galleys.

As is mentioned in the Atlante storico della Serenissima, the oak came from the areas around Treviso, Friuli and later also from Istria, while mountain fir and larch came from Valsugana, Bassano and Cadore. The wood was transported via the rivers: the Adige, the Brenta, and the Piave. 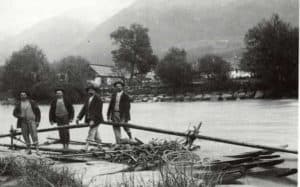 The logs were tied together into rafts (zattere) and carried down river to Venice by the current. Here they reached the Fondamenta delle Zattere, where they were then sorted. Some of the logs were taken to Venice’s Arsenal, others to San Biagio and Giudecca, where firewood was stored. Other logs also moved along the shoreline and were carried to where they were needed for construction: “They are mainly used to shore up the land, as for example was done for the bell tower of Saint Mark’s, larch for the big rafts that serve as a foundation: arranging the planks like flooring on the tops of the piers, which are all cut to the same height. Boats require more valuable wood: oak for the woodwork and the edging, larch for the interiors, and fir
for the ship’s masts.”

Venice’s ‘bricole’ are also tree trunks that have been in the lagoon for centuries and contribute to the city’s unique and fascinating identity. Once this wood has aged and eroded, it is replaced and the bricole that have reached the end of their lifecycle are salvaged and reused to create the objects designed by Pieces of Venice. Each one of these objects preserves a ‘piece of Venice’ and travels the world to tell the age-old story of this city, a rich repository of art and culture.

Condividi:
Posted in Articoli.
Share
PreviousVenice and its Sestieri
NextVenice’s ‘Bricole’: sentinels of the Lagoon